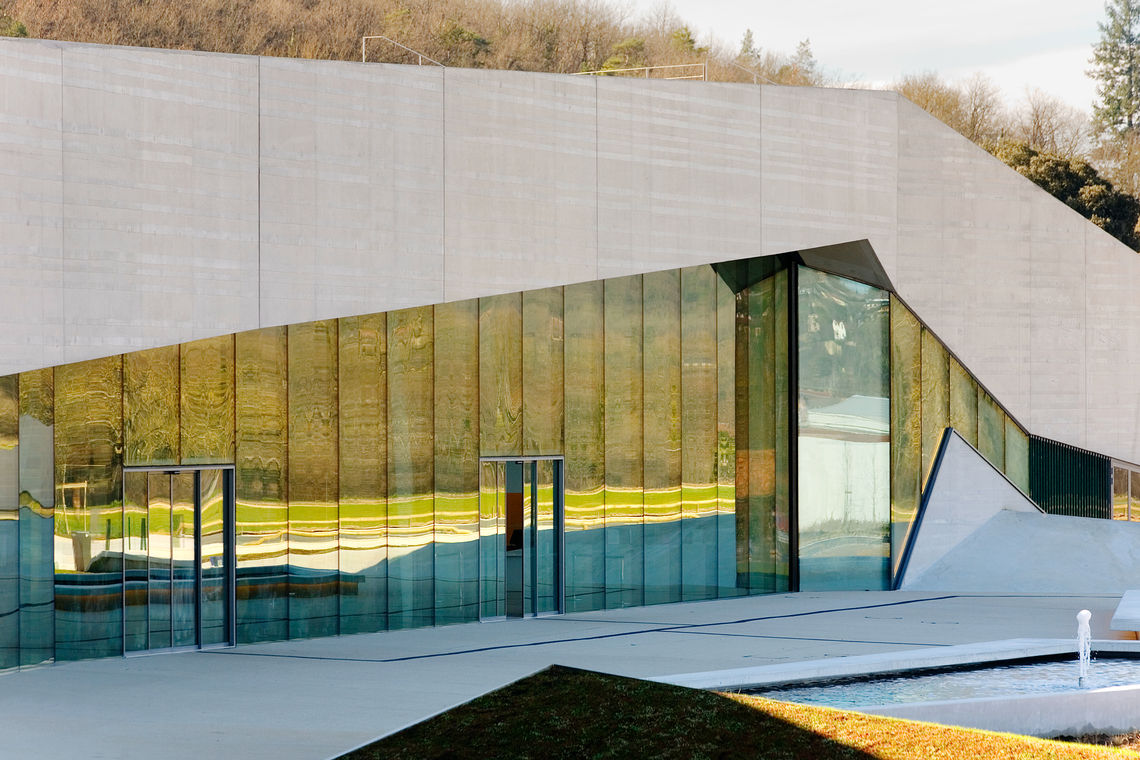 State-of-the-art GEZE door technology is being used in the latest replica of the legendary caves at Lascaux.

With over 2000 artistic representations of animals, the 'Lascaux grotto' - first discovered in 1940 in Dordogne region of France - is one of the world's most impressive testimonies to prehistoric history. GEZE was involved in the third, and currently most involved replica of the caves, which gives visitors from all over the world a realistic impression of the unique paintings.

Discovered by chance in 1940: Humanity's oldest works of art

The wall paintings in the original Lascaux caves have been dated to at least 17,000 BC, and are considered to be one of the oldest testimonies to human creativity. They were discovered by accident in 1940 by four boys who were wandering through a forest near the town of Montignac – causing a real sensation; The prehistoric paintings - the best-preserved of their kind in Europe thus far – were found in great variety and at various stages of completion. They include 2,000 figures and paintings, almost all of them depicting animals. The caves were declared a UNESCO World Heritage Site in 1979.

Replicas true to the original preserve the cave paintings 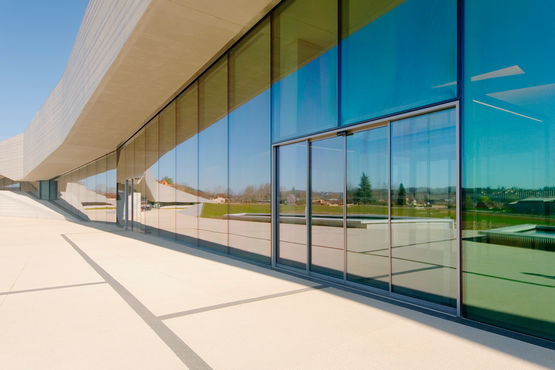 Many thousands of visitors have passed through the caves since 1948, to marvel at the bulls, aurochs, bison, buffalo, wild horses, deer and bears painted on or engraved into the rock relief with a three-dimensional effect. The prehistoric art began to suffer damage, and so the caves were closed to the public from 1963 onwards.

Following two successful replicas of the legendary 'Lascaux grotto', the third and most successful replica has been opened at the foot of the cave mound, with the official name of 'Centre International d'Art Pariétal - Lascaux IV' ( International Centre for Cave Art). This third replica was necessary because the first two replicas had reached their limits due to the constant throng of visitors.

'Lascaux IV' is a complete replica of the original. The 150 m long sharp-edged building, with a single side façade and a completely glazed roof façade, is pushed back into the mountain, reflecting the route between the forest hills and the valley. It encompasses an underground complex of chambers and tunnels - a replica of the cave that is true to the original, with 900 square metres of cave walls.

The cave, which attracted international attention, was designed by a team of architects from the Norwegian company Snøhetta, together with around 40 artists and 150 further organisations – all using state-of-the-art building and museum technology. Experts from the Bordeaux construction consultancy and project management firm VPEAS led the project. The choice of construction elements was the result of their expertise and many years of experience in museum buildings - including the decision to use door technology by GEZE.

GEZE is one of the few businesses to offer multifunctional doors which fulfil the architects' design criteria as well as meeting safety requirements.

"The GEZE project portfolio has provided perfect solutions for this unique object. The automatic door systems and door closers by GEZE combine the functionality and minimalist aesthetics that you need for the most significant architectural objects. GEZE is one of the few businesses to offer multifunctional doors which fulfil the architects' design criteria as well as meeting safety requirements," says Xavier Favand, building expert from the lead construction consultancy VPEAS. 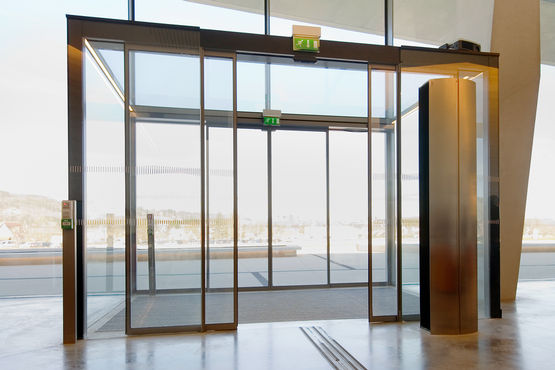 The exterior doors for the two spacious vestibules comprise two automatic sliding door systems with Slimdrive SL NT drive systems harmoniously integrated into the impressive glass façade of the building complex. The same solution was chosen for the interior doors of the vestibules, with the Slimdrive which is only 7 cm high.

With a height of 3 m and an access width of over 2 m, the double sliding door systems also enable comfortable, accessible entry to the foyer, even with a maximum number of visitors. The automatic doors are equipped with state-of-the-art control technology;

Black automatic sliding doors fit the style of the cave 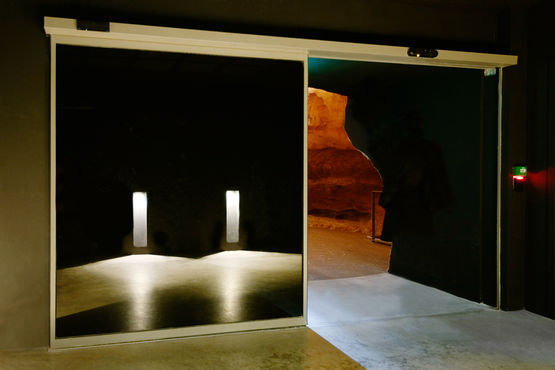 The idea is that visitors should experience the same first impressions as the four youngsters who discovered the cave as authentically as possible. To get them in the right mood, visitors pass through a dark zone to enter a kind of anteroom with two single-leaf automatic Slimdrive SL NT sliding door systems arranged one after the other. Deep black door leaves emphasise the sense of 'open sesame' before entering the 240 m long replica cave with its unique gallery of images. Behind these doors, visitors will find an educational obstacle course that uses the latest virtual image technology to help decode and understand the Stone Age paintings, and provide a wealth of information about the caves. 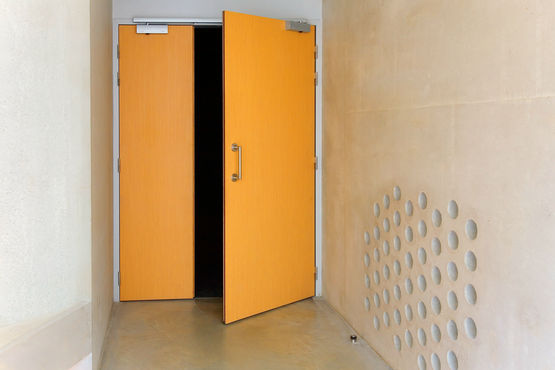 The educational obstacle course is accessed via a double-leaf manual fire protection door which makes is easier for museum staff to admit visitors, whose numbers would have otherwise been limited.

GEZE door closer systems offer optimal solutions for asymmetrically divided fire protection doors: the closing sequence control, integrated invisibly into the slimline guide rails, ensures that the active leaf is kept open until the passive leaf is closed. After use - and especially when people are fleeing in the event of danger - both door leaves close again perfectly, so that the door fully maintains its fire and smoke safety function.

The educational obstacle course consists of a series of exhibition and projection rooms.

The connecting doors between the rooms are special soundproof doors which prevent noise from demonstrations penetrating into the next room. The automatic swing doors close themselves as soon as a film projection begins, and open when it is finished. Sensors of course ensure the required safety levels at the heavy soundproof doors.

The efficient Powerturn drive systems (also in 7 cm design) move the door leaves quietly and easily, and have also proven to be an ideal solution for a safe and speedy flow of visitors between the rooms. Thanks to a smart swing function, the door leaves can also be opened effortlessly despite their weight.

A double-leaf swing door lets visitors out of the exhibition 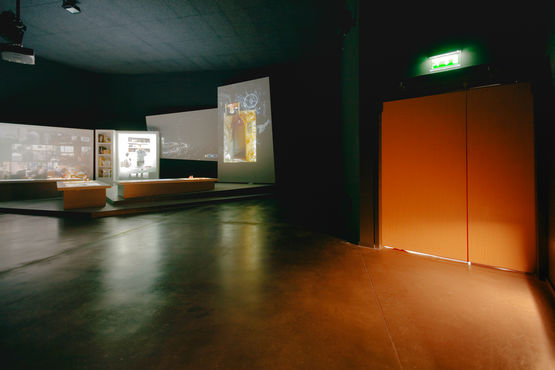 Visitors leave the final projection room via a double-leaf automatic swing door, which manages the continuous opening and closing of the door leaves comfortably and reliably with TSA 160 NT-IS drives. The door can be used especially flexibly via the second, smaller optional leaf.

The movement parameters of both door leaves can also be individually adjusted on this automatic door. In the event of an emergency, the door can also be opened manually in which case it functions like a door with door closers - thus guaranteeing both accessibility and emergency exit protection.

GEZE products in the caves of Lascaux 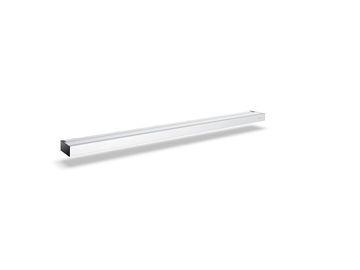 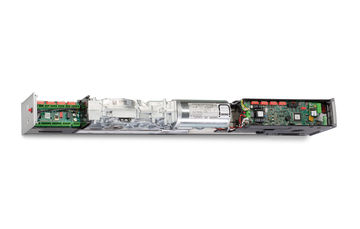 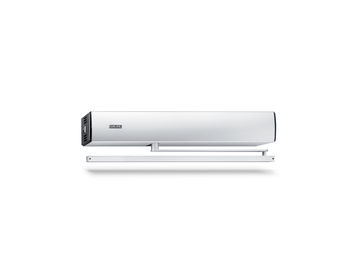 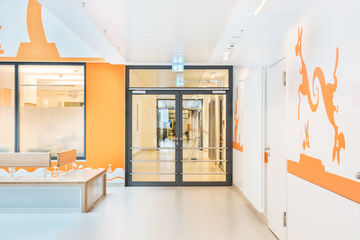 Protecting and saving lives - fire protection doors play a crucial role in the event of fire. They delay the spread of fire and create an opportunity that could help to save lives. 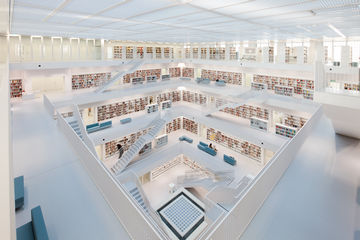 The new Stuttgart city library is characterised by a bright, open room structure and minimalist design. GEZE has contributed to the barrier-free building concept with tailor-made door technology. 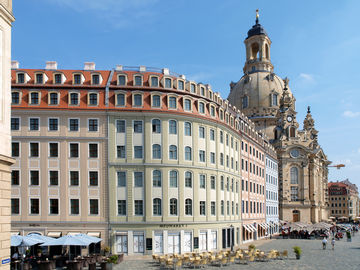 High-level technology in the Frauenkirche